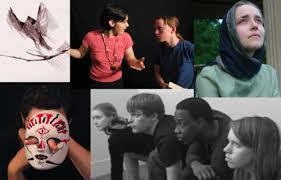 Presenting an exciting series of plays by Still Small Theatre.

Still Small Theatre Troupe was started in late 2012, and has performed a number of original works since that time. Our first play, The Prophet Project, was recognized with the 2013 Making a Difference in Christian Service Award from Gordon Conwell Theological Seminary. We're based in Beverly, Mass., but tour to pretty much anywhere people want us! www.stillsmalltheatre.comwww.stillsmalltheatre.com

The Diary of Perpetua: Adapted from one of the oldest female-authored documents known to history, The Diary of Perpetua tells the story of a young mother imprisoned for her faith. Facing intense pressure from her family and from the authorities, Perpetua must decide whether her newfound Lord is worth not only breaking every expectation of her as a woman, but also losing everything she holds dear. This musical adaptation is relevant to women's issues, human rights, history and Christian life. The play lasts about 90 minutes.

We know Jesus came for everyone, including us -- but what would it look like if He had come to us right here and now? Based on a medieval Nativity play which imagined Jesus' birth in their own English town, A Hopkinton Nativity Cycle reimagines His coming in our own context today. Catch a glimpse of the heart of God as everyday, ordinary people become the unlikely welcoming committee for His Son.

“How I Met Our Father” April, 7 2018 (7pm) at Community Covenant Church
A comedy on coming to faith ... and staying there. How I Met Our Father is a 90-minute play adapted from people's true coming-to-faith stories. Bouncing from hilarity to seriousness and back again, six actors portray a myriad of characters in this quirky exploration of how people arrived at faith in Jesus – and just as importantly, what keeps them there now. From hippies and housekeepers to problem children and pigeons, these stories are not to be missed! The plays are free but a good will offering will be taken that will benefit the Refugee Ministries. Join in afterwards for an informal discussion with the cast and creative team!

No ticket required, but donations are appreciated and registration (below) is encouraged.